“After attending the NCLab workshop at the 2016 CSTA Annual Conference last year, I returned to school with a goal of having students use the NCLab programs before the end of the school year. My 1st year computer science students learn to code using Scratch, Jeroo and Java. I was eager for them to also use the NCLab courses to learn Python and create tangible products produced by their own code. I submitted a grant request for a 3D printer and our local McKinney Education Foundation awarded me $2500.

The 3D printer arrived in January.  Students have been working on projects during this 1st-year computer science course. They began by completing Karel and Turtle Tina lessons, including numerous Turtle Tina 3D designs. Then they used the 3D Modeling lessons and online example projects as a guide in order to write code for their own 3D objects. The students created various designs including a football field, hockey rink, basketball hoop, toilet paper roll and key ring.

After the AP exam in early May, my AP Computer Science A students began using the NCLab software also. They explored a little with Turtle Tina lessons, but most jumped right into the Python 3D Modeling. Numerous students wrote code for amazing projects such as an Octopus Planter, Military Tank and Submarine.”

How did the students build such complex models?  Each one begins by defining objects as simple shapes.  These shapes are then combined, subtracted,  rotated, moved, and tweaked in many ways.  Can you see how the planter started as a sphere-shaped shell?  Or how the tank includes several repeated shapes?  The fuselage of the submarine began as a set of points used to create a Bezier curve.

Here they are: Andrew Cope’s “Military Tank”, Udani Satarasinghe’s “Octopus Planter”, and Michael Hamilton’s “Submarine”. You can run the code yourself! Visit NCLab’s 3D Gallery, and follow the link below each image to open the files. Many thanks to Mrs. Horvath’s class for sharing these 3D models with NCLab. 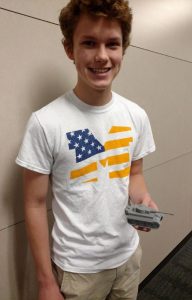 Andrew Cope and “Military Tank”. This 3D model was created with over 200 lines of code. 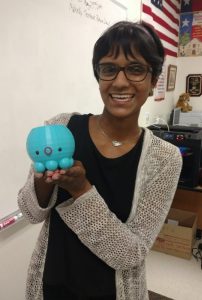 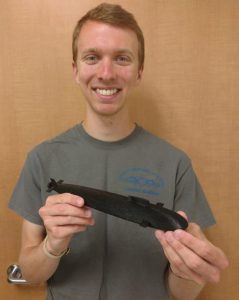 Michael reprinted the submarine, this time in black.

A close up of Andrew’s tank. 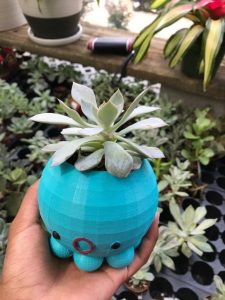 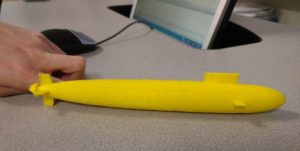